Ten commission spots opening up! And some originals for sale, as well!

In my last blog post I mentioned that Ryan and I are trying to concentrate on paying down some of the debts we've picked up the last few years. We want 2017 to be the year we knock these out, so we can continue rebuilding everything we lost when Ryan was laid off in 2012. 2013 we sunk further and further into debt. 2014 we crashed and had to sell our home. 2015 we stabilized and saved and stopped the financial bleeding at last. 2016 we managed to tread water and successfully (incredibly) made our way back to Washington. Back to the starting point. Now we're here and we're ready to buckle down and get to work crushing the debts weighing us down.

After mentioning that, the thought stayed with me. Blogging (and journaling, which I also love to do) is kind of great like that. For me, once I've declared something and put it into writing, the words have more weight. If only because I've transcribed them from sound to sight. In sight, in mind. And so, after writing my last post, I thought about our goal while making dinner. I thought about it while Ryan gave the kids a bath and I cleaned up the table. It stayed close while we read stories and kissed the kiddos goodnight, and by the time we were sitting down on the couch and pulling out our respective sketchbooks, I felt ready to say, "I think I'm going to open up commissions."

"There's time for a few, if I work in my usual size and style. Maybe that's even a plus now? I can't tell. Anyway, I think I could do ten 5x7s over two months, and that's what I'm thinking about offering."

(I work small, in real life. I actually draw most of the strips at the size you would see them in a newspaper!)

The next day I put some feelers out on social media, to see if there would be an interest. People seemed to be excited about the idea, so I started making plans. And tomorrow at noon Pacific time I'm going to open the Etsy shop and offer ten commission spots! Each for a 5x7 original watercolor and ink painting of up to four pets dressed as BCN sitting at a news desk. Each will be priced $200.00, plus shipping and handling. For almost three years now (can you believe 'Breaking Cat News' will be three years old March 12??) readers have written to me nearly weekly requesting that I paint their pets as BCN reporters. It seemed like a good idea to offer that as the subject of the commissions.

They will take me about two months to paint, and so the time frame on these paintings is eight weeks.

If you are interested, go to my Etsy page tomorrow at noon Pacific time. The shop is closed right now, but you can find the page HERE. I will also post the link on the studio Facebook page, Twitter, the original site, and the GoComics BCN page tomorrow.

(You may want to go there on your own a little early and refresh the page a few times--it will take me a couple of minutes to scroll through the websites and post the links).

When the shop opens, you'll see this image for the commission sale: 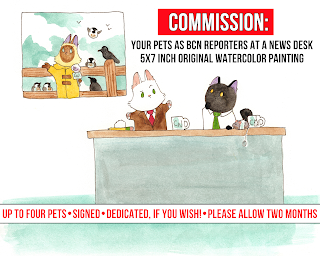 It will have a quantity of "10." This will be first come, first serve and I ask that people please only purchase one. If they do not sell out, I may allow people to purchase more if they wish, but I'd like to give folks a chance to get at least one.

Once you purchase the commission, I will need to email you (or you can email me). Please leave your email in the notes at checkout so I can contact you to get the details I will need to paint your pets. If you forget, don't worry! Etsy has ways for us to contact each other. To paint your commission I will need 1-5 photos of each pet you'd like in the painting, and descriptions of their personalities. I've said "up to four," to keep the desk from getting crowded. However, I may be able to slip in a fifth or sixth pet in a portrait on the wall or a news screen above the desk, etc... It's possible. Please don't count on it--but we can talk.


When I asked people if they'd be interested in these commissions, some readers requested that I offer some of my BCN paintings. There aren't many of my originals out and about wandering the Earth right now. Readers write me with requests to auction them or offer them up for sale. I've wanted to! With the kids and the comic to write, it's been one more thing that kept boiling over on the back burner. But this is 2017, the year of crushing our debt! And I want to help. So, this week I dug through some boxes and looked through what I still have kicking around.

(Spoiler alert: It's a lot. I still have many of my originals. That pot as been boiling over for some time! I got very used to creating paintings for more affordable prints and then safely tucking the actual painted works of art aside).

Here are some of the originals that will be for sale tomorrow:


Four of the paintings for next year's 'Breaking Cat News' calendar will be for sale too! When I opened up the box I had a moment of, "OH YEAH, THESE!" (2016 was a crazy year). Each of the calendar paintings are about 5 x 6 inches, but three months have three inches of additional notes/error corrections/and tiny bonus paintings. I very nearly trimmed these notes off, but then I realized maybe readers would enjoy having them whole. Or at least, readers could decide for themselves and possibly frame them whole or cut them and frame them separately... In any case, I left the notes on.

The December month did not have notes, and so it was trimmed already. It will be a little more affordable than the other three.


Some readers have requested that I offer 'Breaking Cat News' paintings on Ebay in auctions. They'd like a chance to keep bidding to win a painting, instead of the 'first come, first served' approach. I did this with an 8 x 10 inch watercolor painting in 2015, and it sold for around $650.00 at the time. Tomorrow I will be offering set prices on these pieces in the Etsy shop. However, please know that I've heard you and as I went through my originals, I did put a few aside for the "auction-requesting-readers." Including the April calendar page which is a painting from "Today has been canceled due to rain," and the September page which depicts Pucky fighting off the autumn leaves from the window. I still have the original painting from "Reading Kitties," too, where the boys are gathered around late at night reading with tea. And CRAZILY, I still have the original painting from the first limited edition print, the BCN office meeting?? (I was surprised to find that one! The second one is the painting that sold in the Ebay auction, and I think my mind somehow mentally cataloged the first as sold, too? ...I did have a brand new baby at the time. Much was set aside and forgotten). I will likely offer these in auctions in the future, if folks are interested, but right now I need to get through these Etsy sales and see how they go.

Folks who have followed me for a long time asked if I'd offer any non-'Breaking Cat News' originals, and here is where I went pretty wild pulling paintings out of boxes. I suspect these will stick around in the shop for a while, but I've meant to put them up for sale for years, and since I was on a roll...

I was surprised I still had some of these! If you've followed my work for a long time, you'll recognize a bunch of these paintings! I included the year they were painted in each of their Etsy listings. They range from 2010-2015. Most are about 9 x 11 inches or so (I never measured as I masked their edges off, I eyeball everything. I don't measure out the BCN panels or use rulers to draw the boxes either, ha! That's why they all have a slightly honest wobbly feel). I've priced these according to the level of detail and amount of time put into them. Some took much longer to paint than others. The most expensive are 'Gnome Home' and 'Noah's Ark'; they're packed with details and each were some of my longest paintings to create.


And so, that's everything you'll be able to find in the shop tomorrow! Plus one or two small surprises! Ten commission spots for 5 x 7 inch original watercolor paintings of up to four pets at a BCN news desk. A good offering of 'Breaking Cat News' original paintings and some of my watercolor illustrations as well! At noon Pacific time tomorrow, Friday February 17th, I'll be opening up the Etsy shop! I hope you'll join me to take a look! Have goodnight!