Wow, how have I not posted an entry since January? It may have a lot to do with...


Life has been kinda crazy lately. I spend my days looking after this amazing little fellow, and nap times and nights frantically playing catch up on commissions, comics, and projects. Added to that schedule are some big life decisions which are happening fast and furious....

The past three months have been bananas, so I am going to share everything new as a list.

1. We are selling our home.
2. We are moving back east.
3. I accidentally started a new web comic.
4. I have some projects in the works that I am very excited for.

Some predictable questions I will quickly field:

1. Why are you selling your home and moving back east?
We've had a difficult year and a half financially. My husband was laid off when NCSoft decided to close their American offices, and things have been tough since. He went into work one day and they sent everyone home. That was it, no warning, no notice. It came weeks after we purchased our home when I was six months pregnant. I didn't write about it too much because--and this is hard to admit--I kept feeling like it was going to blow over.

I kept thinking, "When we have good news to share, I will tell the whole story." It hasn't come yet, and so instead, now I'm inviting you to follow the next leg of our adventures as we try to figure things out in an economy that has not been kind.

The fact that this happened so soon after we bought our first home has been especially hard. We have taken some gambles and risks in the past, but this was one of the times we played it safe. That has been hard to reconcile with... you know...logic? It almost felt like a punishment for making a safe move--I know it's not, of course, but it felt like that at the time all the same.

Before we felt it was safe to have a child and buy a house Ryan and I waited until we got married, he been in a full time position for a while, we had built up our savings, and had health insurance. And despite all the careful planning, it all turned on a dime. Suddenly there I was, weeks before Christmas, pregnant in a new home we had no way to pay for. Do you know what it's like watching "It's a Wonderful Life" under those circumstances? Let me spoil it for you: It's rough.


(...To be fair, I can't make it through "It's a Wonderful Life" without ugly crying in a good year).

I shared this in my New Year's post, but I'm sharing it again here. I wrote last May when the hospital bill for Luke's birth came in:

"We waited to have a baby until we had good health coverage. We waited to buy a house until Ryan got promoted. And then one day in December, without notice, Ryan's entire office just closes.

So, don't plan stuff out folks. You just can't pretend you can predict tomorrow. You can line up everything perfectly, be in the best circumstances, and it doesn't matter--in a good way. Because if you're in bad circumstances, with everything stacked against you, it equally doesn't matter. You can't predict tomorrow, and tomorrow it can all change.

What will happen, happens. Live life, make the best of it, and don't make love decisions like marriage, children, or being happy on cold factors like money. Money can be swept away at a moment's notice; love endures."

I feel that more than ever now. This has been a hard year, but Luke brought so much joy into it that we can't imagine how we would have gotten through it without his smile and his laugh to innocently remind us that hey... It's just a house. Things could be worse.


It became clear a couple of months ago that if we stayed on this path we risked possibly losing the house sometime in the next year. Through freelance gigs, commissions, and any work we could find in this economy (which could be its own post) we have been able to keep the mortgage afloat so far. We're proud of that. It has not be easy. We're selling our house now, while the decision is still in our control, while we still have enough resources to move and start over, so that we can avoid the possibility of a foreclosure in 6-12 months and destroying our credit and financial future.

Maybe it would not happen--but it's too big of a risk to take. Remember in my post about risks, when I wrote, "I still don't take stupid risks" ? Well, keeping our home when we could lose it in the near future would be a stupid risk.

Moving 3000 miles back east is also a risk to be sure, but it's more of a calculated risk. It's a risk that keeps our family together; it protects our future, it leads to (we have reason to believe, fingers crossed) new opportunities. It reunites us with our family at a time when family is much needed. It's a little gloomy raising a baby thousands of miles away from all of his grandparents, aunts, uncles, and cousins.


And so, we decided to sell the house while circumstances were still (barely) in our favor.

It's the right thing, it's the responsible thing, but just because it's what's right doesn't make it easy. Sometimes the right thing to do is really hard and it doesn't look like what you want. This is how we can best protect ourselves and make it possible to buy a home again some day when we have recovered financially. And so we listed our beautiful home for sale a week and half ago.

Is this scary? You betcha. Does it suck? A lot. Ryan had a career here that he was proud of, work he loved. Saying this has been an unfortunate series of events is an understatement. For me, the gaming industry has temporarily lost its dazzle and charm. When the work was there and the money was good, it was great. Everyone was having fun. It was a lot of launch parties with free sushi, VIP tickets, complimentary game titles, passing out brand new kindles for everyone at the holiday bash.... Now I see an industry that builds its millions on contract workers shuffled from project to project ten months out of the year, laid off just before their companies legally have to pay them health benefits. I see titles come out to great applause, awards given to marketing teams, and publishers shuttered so companies can pull a cash grab and keep the profits without paying the team the bonuses they were promised.

I see companies that close their offices two weeks before Christmas, laying off people with families without notice. They call it "restructuring".


It's how to run a business without having to think about pregnant wives or dental benefits or keeping young workers into retirement. It's an industry that could benefit from unions, but the kind of money the big companies pull in? It'll never happen.

We've been through a terrible heartache, but the day after we finally made the decision to sell and move I woke up feeling relieved for the first time in almost a year and a half. I didn't realize how frightened I had been of the uncertainty looming in our future until we chose a path.

And that path leads back home to Rhode Island. This is where the decision turns on its head again and becomes happy. We're sad to leave Washington, but we're happy to return to our family and east coast friends. Luke will finally live close enough to see his grandparents and aunts every day. I can't describe the feeling knowing I will soon be able to go to the movies on an afternoon with my Mom, or hang out in my Dad's work space, or sing show tunes in the car with my sister. Little things creep into my thoughts; I'll be able to see stars again and hear peep toads in the summer. Thunderstorms and the Atlantic ocean. Clam cakes and frozen lemonade.

It's a mixed bag of emotions. It all feels a little beyond our control right now though, like we're riding an unexpected tide of great change, and there is a strange comfort in that. There's a little bit of peace in letting go and seeing what happens. For whatever reason, there is a strong feeling that we're being drawn east. The circumstances are rough; the joy to return to family is real, so is the sadness to leave our home, our dear west coast friends (whom we love... That is the worst part. Leaving our friends is the worst part), and the life we've built out here for ourselves. The west was good to us, and hopefully it will be again one day. The future is unwritten.

2. Wow... Are you okay?
Yes, I am. Thank you. Well... No, not really, but I mostly am! ...I will be. I've shared so many good times on this blog, I would be remiss to leave out the harder times. People have been so supportive of our story and I am grateful; love endures the bad times. Life is not one big hallway you run down catching high fives all along the way; there are plot twists, there are lows, and we traveling through a valley right now. We will be okay though.

3. How are you and Ryan?
While the economy has been hard on us, love and family life have remained blissful and we're very grateful for that. Even during our hardest times, we've still had a lot of happiness thanks to our relationship, our connection, and our son. I feel very blessed for all that we have between us, and this sounds irritating in a Pollyanna way, I'm sure: but I'm thankful for the perspective the last year has given us. We've had a pause from our material success to hold tightly to less tangible--but more meaningful--successes. We love each other truly, we have a healthy, strong son. For all that we've lost, we're very rich when it comes to what matters most. 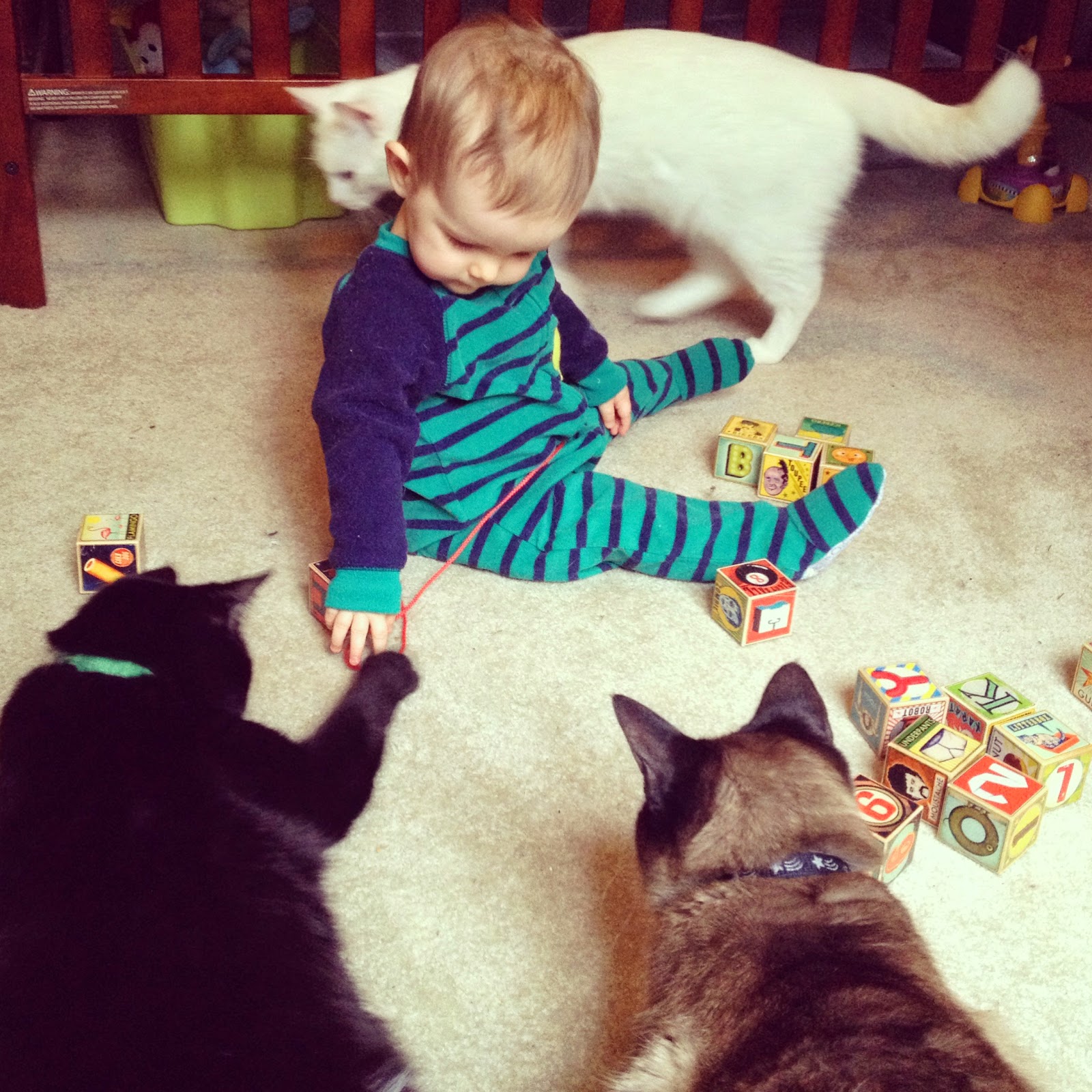 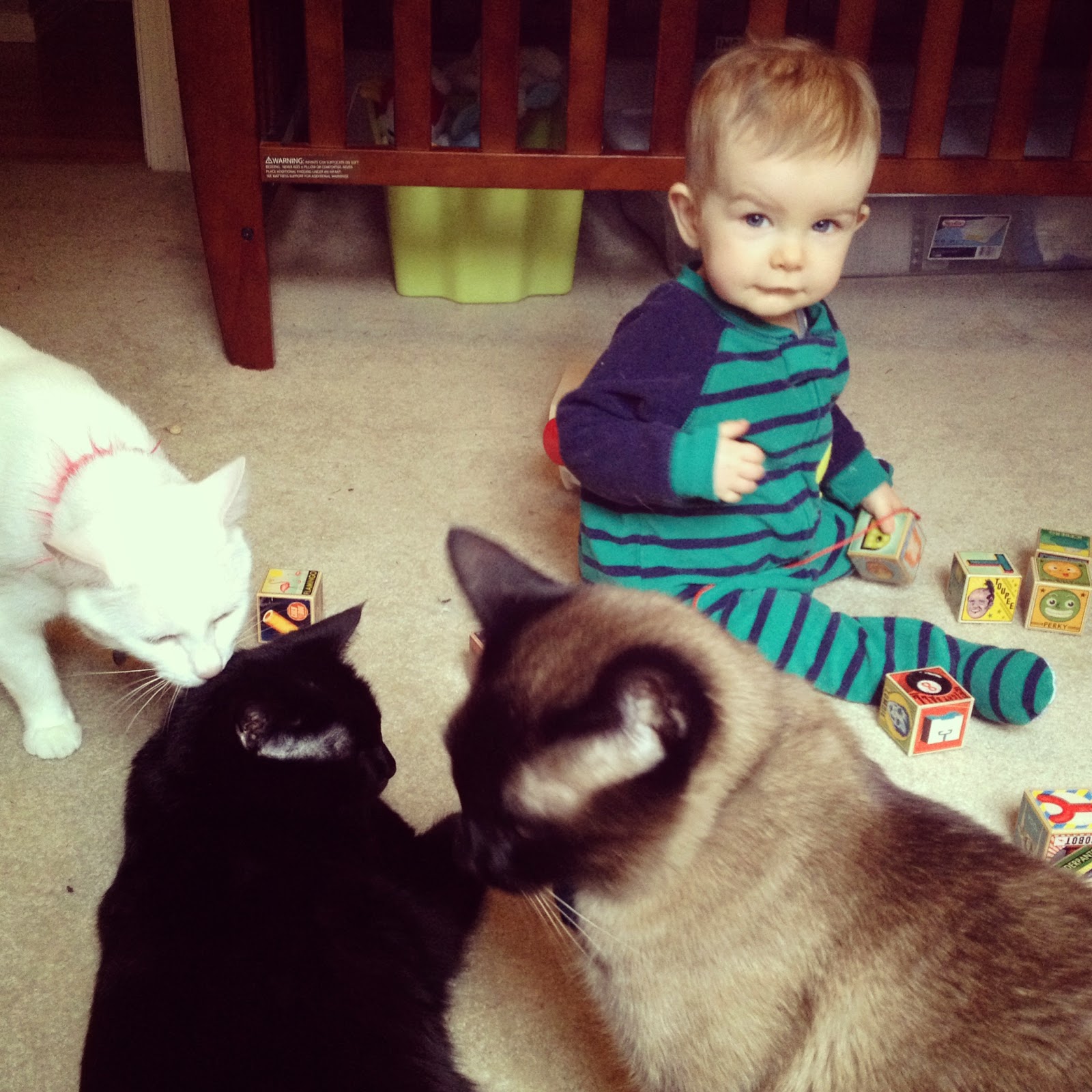 4. On a way, way, WAY lighter note... Did you say you have a new webcomic?
I do! It's called BREAKING CAT NEWS! You can find it here, and I just wrote a post explaining it, which you can find here.

5. ...And Projects?
I have some projects in the works that I am very excited about! I'm not being intentionally vague, just some of the details are a little up in the air and one is still coming together. I feel really good about the next year creatively, though. My Alphabet prints book is one such project, a storybook with two very talented gents is another, and I may look into publishing BREAKING CAT NEWS into a real deal comic collection. I've had some fan requests to do so already, so why not take a stab at it? Swan Eaters is still bubbling over on the back burner too. I will be returning to that strip.

So,... That's everything! It's a lot, I know. Bottom line: We're going to be okay. We're not giving up. We're still pursuing our dreams, we're just going to be chasing them a little closer to home for a while. Here we go! Spring 2014, here we come!
Posted by Georgia at Saturday, April 12, 2014