I painted another portrait of the Hawker clan from my webcomic Swan Eaters. This time the subject was five year old Clover, the Hawker's albino child.


Swan Eaters is about a family of traveling scoundrels called the Hawkers who have a side show selling snake oil, telling fortunes, and displaying oddities. The Hawkers have seven children, and Clover is the second youngest. She was born an albino, with white hair and red eyes. When the Hawker show is set up, she is billed as the "Ghost Girl" and stands on a small stage in a tent. She shares this tent with her brother Pilot's act, which features his dozens of trained rats.

Clover is a bright, curious child, and is often shown in the comic tagging after her older sister Salem.


Early in the comic Clover stumbled upon a little doll with a mustache in her grandmother's gypsy wagon. Immediately enchanted, she asked if she could keep it. It's hinted in the comic that the toy is a voodoo doll of Clover's Uncle Offal, probably made by Grandma years before and forgotten until Clover found it.


Clover loves Dolly and is rarely without him.

It's obvious in the comic that Clover is Grandma Hawker's favorite of all the children. Clover is seen in Grandma's company more often than in her parents, and she shares the old crone's wagon. 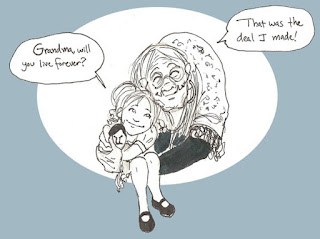 In the most recent plot line a town of condescending creeps with eerie smiles stole the Hawker triplets, Salem, Ivan, and Peter. Grandma approached the town alone to ask for the children back. She shrugged off several insults, but when the town leader superstitiously explained the Hawkers could keep their albino child because her red eyes indicated she was rotten to the core, Grandma laid the town to waste with a mind-wiping curse.

And that's a little bit about Clover! 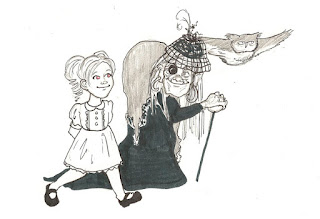