Knitting Narwhals and the Inch and a Half Blizzard!

I went back to the drawing board, and sketched a pair of Knitting Narwhals. They're painted now, and I'm pretty pleased with them.

For the past two days we've been stuck inside because, that's right.... 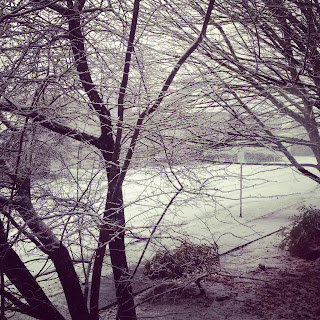 It snowed two inches in Washington.

Snow is something Washington likes to pretend never happens, despite the fact that it definitely does and even as little as 1-2 inches seems to render their cities completely helpless. They don't treat the roads! No salt, no sand, no plows! We got trapped in the apartment several times last winter, including over Thanksgiving. Oh, and Ryan's college graduation was canceled because it snowed and the entire city shut down, but no, it never snows here. (Wink).

Now since they don't treat the roads, everything turns to ice because that's how sunlight followed by nighttime works. Then as if to passive aggressively spite the snow, everyone still drives on the roads. And surprise, a ton of accidents follow because the city is basically just a series of equally passive aggressive hills.


And so, we stay in and avoid the terror of two inches. This weekend it's been pretty wonderful to have the snow trap us, really. Our two year anniversary was Friday night, and it's given us an excuse to extend the celebration. Yesterday I made some cookies and we continued our trial of Netflix. We're not crazy about the lack of selection if I'm being honest. They don't have 'Bedknobs and Broomsticks' or Stephen King's 'It' streaming? Really? Last night Ryan said, "If I wanted to be told 'we don't have that movie' I would have gone to Blockbuster!"

Nevertheless, we do enjoy the novelty of television at our fingertips again. We relaxed on the couch, Ryan sketching out a city for a drawing he's been working on, me painting these narwhals. We also yelled advice to people on 'Hoarders' and I introduced Ryan to the Hercule Poirot mysteries. It was a nice day.

I leave you with a video some folks made in Seattle last year when it also "didn't snow" (wink). This is why we wait it out inside with cookies and tv. Enjoy!