He could tell it to you better: My Opa

My wonderful grandfather passed away this weekend.

Some men die and you can't find much to say about them. The trouble with my Opa is where to start. In 90 years he lead the kind of live most of us can only dream of. He was born to Irish immigrants in Queens, NY in 1921. He was initially denied by the Navy, but when World War II dawned he took his chance to try to enlist again, and it paid off. (He would share this story with us when we faced rejection in life). The New York boy the Navy turned down reached the rank of captain by the 1960s. He was commodore of a fleet of three ships, with the USS Joseph P. Kennedy Jr. as his flagship. When he retired from the Navy, he went back to school for his Masters. He taught history and German at Rogers High School in Newport and when it was time to retire from that he learned Chinese, and spent several years in China teaching English. He and my family were stationed in Germany during the American occupation after WWII. He worked in the pentagon, sailed the Mediterranean, attended Kennedy's funeral, and made a pilgrimage to the birth place of Christ. He traveled the world as a soldier, a captain, a teacher, and a missionary. He trained for the Olympics as a young man, he was a magnificent gymnast, a fantastic swimmer, could perform the parallel bars in his youth, and began every day with a regiment of push ups and standing on his head well into my childhood, so his 60s.

In addition to languages, he taught sailing, swimming, Bible studies, and up until two years ago was still volunteering in the Newport school system teaching young children to read. He was the kind of grandfather who took a personal interest in each grandchild, their education, and their well being. My outings with Opa included regular German and Bible lessons, with questions and assigned readings to be completed before our next visit. They also included fairy tales from all over the world, fables, and stories of his own experiences when he was young. We shared episodes of fainting in our teens and early twenties. When I expressed my shame over fainting in public, he told me a story of when he stood on a field in Germany as a very young man watching tanks roll in. That awful, cold pin pricking began up his legs and spine and he knew a faint was coming on. Not wanting to pass out in front of his Navy buddies, he casually bent down pretending to tie his shoe. He rested his head against his leg, the closest position he could get to putting his head between his legs without giving himself away. I was comforted, and armed with a tactic to avoid fainting in public that worked wonders.

He often shared his vulnerability with us, he walked us through his past realizations. He had another story of how he was at a dinner honoring one of his many military achievements, and he began to choke on a chicken bone. Too embarrassed to ask anyone to help him, he politely excused himself from the table and made the long walk to the lobby, where wordlessly he begged a doorman to assist him. The bone came up just as he began to see stars, and at this point in the story he would turn to you and say, "Can you imagine? I was so prideful that night, I nearly choked to death. I learned the hard way that night, never be too proud to ask for help." I would compare my grandfather to a philosopher before a soldier. 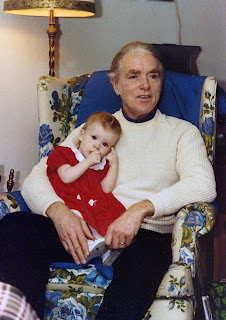 He had an incredible storytelling ability, and as his voice boomed and bellowed through a tale, he would take on accents, expressions, a twist of a hand, a cock of the head to portray each character. When I was nine he told me the story of Jane Eyre over the span of several of our visits, and later when I read the book for myself I realized many passages he had recited word for word. (Let me tell you, nobody could perform Mr. Rochester like my Opa). He told me the Monkey's Paw during a thunderstorm once, on a dark afternoon in my living room. I was just old enough to be too cool to be scared, but I jumped out of my skin when he slyly knocked on the wall as he told of the son coming to the door.

Each story was instructive, though the lessons would be understood later. At the time they were just wonderful stories. The Monkey Paw warned us to be careful what we wished for, Rumpelstiltskin (I tear up just remembering the voice he did for the little imp) taught us not to boast or make rash bargains. His personal stories, like the prideful chicken bone, taught us important truths. He urged us to do the right thing when it was most difficult, to stand up for others, and that how you treat those who serve you, waitresses, bell boys, cab drivers etc is the reflection of your true self. "Be good to everyone, not just your boss or your best friend. That's easy. Sometimes people make a good impression, but it's on the easy people, the people they need to impress. Watch how they treat those whose good opinion they don't need. If a boy takes you out to dinner and he is rude to the waiter all night: That's who he really is."


He knew early on I loved fairy tales, and as he traveled all over the world he returned with new ones. Ye Xian, the Chinese fairy tale of a young girl and a beautiful fish, was one I asked for over and over again. Knight of the Swan was another favorite. My love of illustrating and children's stories come directly from him and the tales he used to tell me.
Two years ago he brought me to the Redwood Library, where he was a long time member. He was researching Hans Christian Andersen fairy tales, and teaching me the importance of finding original texts. "Publishers change words or passages with each edition. Always request the earliest copies of books you can find." He had ordered several prints of Andersen's tales, and carefully traced the sentences between two pages, comparing the same paragraph. He planned to read them aloud to a reformed men's group he was counseling through his church. He had tried many different stories with the men, before hitting upon Hans Christian Andersen, which they greatly enjoyed. He supposed it was the harshness of Andersen's realities striking a chord with the men who themselves had faced difficult times. He was only too happy to research Andersen for them, to give them the best representation he could find. I was grateful to be resting in the stacks beside him, for though he was 88 years old at the time I'd spent the day trotting to keep up with his strong, fast gait.

A lot of grandparents sit on the sidelines. They show up for Christmas with sweaters for kids, they send cards, they remain in the background. My Opa was like an extra parent, one more resource any of us grandkids could turn to for insight, for support (my Nana is equally present, they are both really amazing). To give you an idea of his role, he was the person who told me my parents were getting divorced and explained what that would mean. I was seven. We talked about it at length, and even as a small child I felt an equal part of the conversation. It wasn't something I had to just accept from an adult, it was something happening to both of us. He shared how he felt about it. He speculated how each of my parents felt about it. And he asked me how I felt about it.

My cousins and I were very lucky, we've been discussing this. I'll be 30 next month, and until now I have had both of my maternal grandparents in my life. Up until the last couple of months Opa was quite healthy, and his mind remained complete right to the end. Ryan was able to meet him in May and they discussed video games for much of the afternoon. Ryan explained his job, and Opa asked many questions. He was most interested in the tournaments Ryan plays in, and hearing about the Street Fighter World Championships at Evo. My 90 year old grandfather. How incredible is that? He planned to take us to the Yacht school in Newport this autumn. He brought me there to see how the large ships are repaired and restored and we both thought Ryan would love to see it too. And so I am sad that instead I am returning home for his funeral, but I am so grateful that we all had him this long into our lives.

And to step out of the 'granddaughter box' I am grateful to have known this incredible person. Captain Charles S. Quinn Jr. was larger than life, yet remained down to Earth. He was a decorated Captain who played in the grass with his grandkids, who shared his faith, hopes, and wisdom. He made mystery games for us to solve, with clues, red herrings, and elaborate back stories for each of the characters. When I was envious my older cousins got to spend the day at school, he turned our walks down to the general store for candy dots into important business. I spent many childhood mornings sitting next to him as he stood on his head, collecting his thoughts and preserving his circulation. Then we'd head out to the kitchen, a poached egg for him, Life cereal for me. Those mornings I have been thinking about the most the past few days. What I wouldn't give to be five years old again for a moment, surrounded by blue flowered wall paper and wood cabinets, listening to my Opa tell a story about a patient Mickey Mouse carefully planning a fishing trip, complete with Donald Duck's exasperated voice at the other end of Mickey's phone, ready to skip steps and hilariously mess it all up. 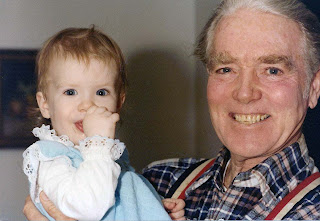 He was one of the best, most brilliant people I will ever know. I can't believe how lucky I was to have a grandfather like him. God could not have picked anyone better for my cousins and I to love.