Ten days to go, and we're at the point where pretty much everything we're doing is wedding related. I've finally begun to wire my bouquet together and will soon share that story (Spoiler alert: wires are sharp and floral tape is gross). Ryan has been finalizing plans with the restaurant, the officiant, and the grooms ninja.

And we finally have both of our wedding bands! Mine was purchased a few weeks ago, but Ryan's had to be specially made to fit. 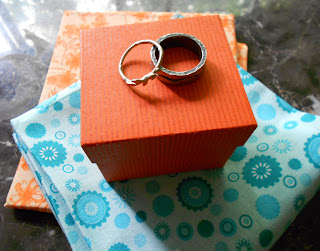 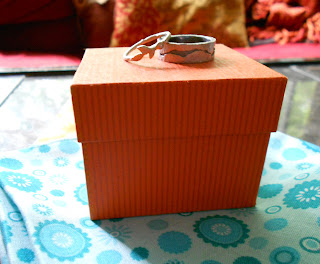 Even though we began our search looking for antique bands to match my 1920's art deco engagement ring, we both fell in love with rings by modern jewelry artists. My wedding band is a Kamofie, created by Sofia Kaman. You may recall the name, as Lindsay Lohan famously visited their storefront in Venice Beach earlier this year. Ryan's band was crafted by Todd Pownell of TAP studios. Both artists draw inspiration from the natural world. While Kaman shapes precious metals and stones into gentle reflections of nature, Pownell emphasizes the raw, simple beauty of the materials he works with. In the end, I'm really glad we found these two wonderful artists and we couldn't be happier with our rings!
Since I was a child and watched Robin give Maid Marian a waterlily ring in the Disney version of 'Robin Hood' (the awesome one with the foxes?) I have wanted a wedding ring with some kind of floral element to its design. I spotted this one as we were being shown much more elaborate (and expensive) flower styled rings, and it was the simplicity that I fell for. All the rings I had seen that day looked like stones in metal, and this looked like a frozen twig dusted in ice. It had that creative illusion of appearing to be what it was imitating, rather than trying to improve on the design of a flower with diamonds and gold. BONUS: The leaves in this ring perfectly hug the side of my engagement ring, which proved to be a tricky shape to shop for.
As I looked for floral rings, Ryan explained time and time again that he wanted "whatever looks the most dwarven."  You see, he's a real big fan of J.R.R, Tolkien's Lord of the Rings, Dwarf Fortress, and dwarven culture in general. (Why yes, we are nerds, why do you ask?) At first he wanted a ring carved from actual stone, but they were difficult to find and we kept hearing they had a habit of shattering. Eventually we began looking for metals hammered to look like stone, and when he saw the cracks in Todd Pownell's ring he was delighted. "I can't wait to for people to ask about them." He told me cheerily as we left the store. "I'll say, 'There was this one time Zeus showed up, and he started acting like a total Olympian jerk, so I punched him right in the face. My strong, handsome fist was fine, but the ring got cracked'."
We bought our rings right here in our very own Seattle in the locally owned and operated stores Twist and Facere. The folks in both stores were very helpful, I'd recommend either!
This concludes my break from wiring 40 or so flower brooches. Back to the grind. I'll leave you with the waterlily ring scene from Robin Hood, which just so happens to be our song.