Puck makes his past shelter's newsletter! 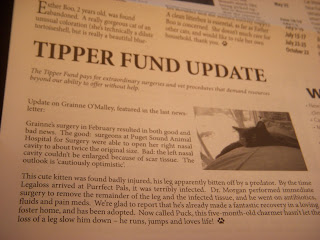 Our young cat Puck made the newsletter for the shelter he came from. For those of you who don't know, we were lucky enough to get Puck from an amazing no-kill shelter here in Washington called Purrfect Pals. When he came to them he was missing part of his leg. No one knows for sure, but it was suspected that a predator had bitten part of the leg off. It was badly infected, and thankfully due to the fund mentioned in the newsletter they were able to give Puck a life saving surgery to remove the rest of the leg and infected areas.

I can't imagine what Puck went through when his leg was injured. When he came to us he was about twelve weeks old. His leg had been removed a few weeks before and his fur was still growing back over healing incision. He was fostered by a marvelously kind and patient woman named Sue who brought him to our apartment. From his first evening in our living room Puck has been sweet and brave, a little bundle of hopping energy. Nothing slows him down. I watch him every day test jumps, explore the closet shelves, and teach himself how to get onto various pieces of furniture. You can see a video of him climbing the bookcase and then Agatha's cage here.

Hie is just remarkable, especially in light of the hardship he faced as a kitten. Every night he sleeps beside me, rolling under my chin when we face each other, or spooning my back when I turn over. I feel pretty honored.

He's a happy go lucky little charmer, always curious, always gentle, a terribly sweet little guy. We're so lucky to have him! Elvis thinks so too.