Old Enough to Believe in Magic 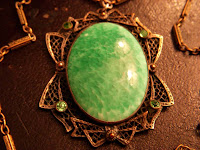 Last night I had a kind of Irish Christmas Carol happen. For years I've disliked St. Patrick's day. Oh, don't get me wrong. When I was a child, I was all about it. However, as I got older it began to lose its charm for me. Look at any picture of me and it's hard to miss I'm incredibly Irish. There's pretty much nothing else in these veins, my blood's straight green. My parents even met on St. Patrick's day, tomorrow is my kid sister's birthday. I should love this holiday but often it gets me down in the grumps. Last night as I was trying to fall asleep, a green wave of memories came over me you might say.


One reason I've disliked the holiday is I don't drink. Another is the history of the Irish people. No one was wearing any 'Kiss Me I'm Irish!' shirts when Americans were lobbying to close their borders to the Irish during the famine. For a long time the only decoration with the word 'Irish' were the 'Irish Need Not Apply' signs businesses hung in their windows. Now that we're considered human, everyone wants to wear green and come to our parade? Yet another reason is the history of St. Patrick himself. Driving out the snakes from Ireland is a charming euphemism for persecuting the pagans. St. Patrick was one of the first in a long line of English men who told the Irish how to behave, and we celebrate him? I'm Catholic, let me tell you, we've got better saints we could be celebrating. Many Catholics pray daily to St. Anthony, St. Francis, and St. Jude respectively to find our car keys, protect our pets, and win us the lottery. And do we honor them with so much as an ice cream cone?

I have to pause here to share that Preston just sent me a text, "I hate St. Patrick's day, I wish it were dead."

Last night I laid in bed anticipating the day. I don't like being a downer, and I thought back to when I was little and St. Patrick's Day was one of my favorite days of the year. Why was that? What happened? Travel back in time with me to five year old Georgia Dunn, won't you?

We would find me dressed in a green Osh-Kosh-B-Gosh number, socks with shamrocks, green ribbons in my pigtails. You should know when I was very little I misunderstood leprechauns. (I blame the 80's tv show the Littles for this). I didn't categorize leprechauns with fairies, unicorns, and elves which I hoped were real, I somehow managed to lump them in with mice, ants, and moths which I knew were real. Like any morning my father was going to come up from the basement and tell Mom, "Candy, call the exterminator! We've got leprechauns." I awaited this as excitedly as I hoped we'd be infested with mice which I knew from books were soft, adorable creatures. I imagined I would sneak down into the basement and catch a glimpse of leprechauns dancing in little circles, playing tiny fiddles, and quickly warn them of their fate---"Run! My parents think you're going to chew through the wires and poop everywhere! A man is coming with leprechaun traps! Quick, follow me, we'll have adventures in the garden!" (Later my parents would spray for leprechauns in the garden).

Just as I had misunderstood leprechauns I also believed rainbows actually ended in pots of gold. I figured not only was this where gold came from, but it was probably how people found it in the first place. (Cut me a break, I was five). My Mom would point out a rainbow as we drove in the car and not understand why I would struggle against my seatbelt, pointing and kicking furiously, "Follow it! FOLLOW IT! What do you mean we can't? We're going to Nana's? Who cares?! Nana will understand! Tell her we saw a rainbow--FOLLOW IT!" I knew leprechauns had something to do with rainbows and harvesting gold from them, and so the whole month of March I was on full alert for any movement in the grass or colors in the sky. I stalked the forest behind our house, I patrolled the stone wall running through our backyard. I had it all planned out. I was ready to spring on one of those little buggers at a moment's notice and scoop it up. "WHERE'S YOUR GOLD? TALK YOU!" I'd say, hoping to God and all the saints that leprechauns didn't bite.

When my mother would snap the buckle on my corduroy overalls in place St. Patrick's day morning she'd whisper, "look out for leprechauns today! This is the one day of the year you can be certain they'll be about. If you see one follow it back to its pot of gold, okay?"

I would solemnly promise, cross my heart. Bees made honey, leprechauns made gold. Gotcha, check! I'd pick up my Muppets lunchbox and swagger into pre-school. I was obnoxious all day. "I'm wearing green because it's St. Patrick's day. Do you see the mouse on my pin? He's Irish. Do you know I'm actually Irish? My family came here from Ireland. We built the mansions in Newport." I thought that was awesome; I didn't get that we built the mansions in Newport because we were cheap labor.

As I laid in bed, this was the first time I paused. I was really proud back then, and excited because I didn't know the centuries of miserable history or the Debbie O'Downer stories that come as you get older in an Irish family. "And t'en Unc hung himself down by da' river be'cus dere was no socks. Dat was in the year nineteen hundred and twelve---" All I knew was hey, I'm Irish, this day celebrates me and my family. "You're English, what do you have? Boxing Day? Okay, well that sounds like the worst. We're having corned beef tonight! Do you have leprechauns in your basement? Because I'm pretty sure we do."

At twenty nine years old the memories broke back and I was left in bed with a past of springtime adventures behind me and a day of grumbling ahead of me. I tried to weigh the positives. What did I like about St. Patrick's day now? Corned beef and cabbage, and I'm attempting to make my own for the first time this year. That's something. And every year I wear my Great-Great Nana Sarah's beautiful green stone necklace and I love doing that. All day I collect compliments and get to speak about a cool lady who's been gone almost one hundred years. It's a respectful way for me to honor my family and my heritage on the one day Americans celebrate that heritage by mocking our culture's alcoholism.

There's that edge again. The annoyance I can't seem to shake. Five year old Georgia didn't have that. Back then the day was all about misunderstood magic and great possibility. Irish magic. An instinctual excitement that had my little fair head bent into any thicket of clovers to scan very, very carefully for itty bitty creatures of the past. Tiny people who had followed us from the old country to chase after new rainbows and harvest gold for us in the young America. Life has a funny way of looping around and showing you all the stuff you grew too old for and scoffed about may have actually been important after all. When you grow too old to believe in magic and the impossibilities, what do you win? Reality. The same dull grey stuff we're all handed and told to accept. No leprechauns, Georgia. And here are some flowers for Santa's grave while we're at it.

It's all about believing though, isn't it? Children get that. They understand it's a choice. Believe, or don't. Believe in magic, or win at having the answer for everything. We get too old to believe because we learn what feeling silly feels like. Can we grow old enough again to not care? I recalled we'd get to Nana's after those car rides and I'd tell her, "We saw a rainbow, but Mom didn't follow it." Nana would wave her cigarette furiously, "Candy, why didn't you follow it? There was probably a pot of gold sitting at the end of it!" Mom would shake her head, "Oh Ma, c'mon." And here in bed last night I remembered, that I believed in leprechauns because Nana whispered to me afterwards, "Your mother's too old to believe, but I know it's true for a fact. My kitchen is filled with leprechauns. They're always turning the faucet back on to drip whenever I leave."

You tried to make the Irish lose their magic, St. Patrick. I think for myself, and my future kids, and Gracie's future kids, I'm going to keep the day magical. Rainbows, leprechauns, pots of gold, the works! So today for the first time in years I got out the Irish Mouse pin I wore so proudly through elementary school. I'm going to pin it on my jacket before I head out to the post office. And chase any rainbows I see on the way. Maybe there's some magic left in this holiday that St. Patrick missed.